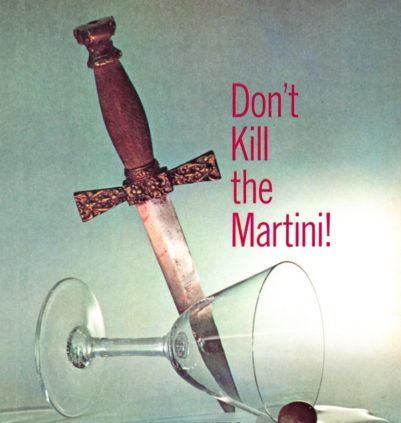 There is no cocktail so classic as the dry martini. What it lacks in ingredients (vermouth, gin, ice and a garnish if you’re feeling fancy), it more than makes up for in glamour.

Yet this week, the mystery behind the martini will come to an end, as a panel of judges decide what makes the perfect pre-prandial. The World’s Best Martini Challenge is the first event of its kind and launches in south London, on Tuesday evening.

Naturally, only gin-based beverages will qualify. Martini purists have long since considered James Bond’s ‘shaken not stirred’ vodka martini an aberration. For them, the ideal martini is made with gin and stirred exactly 18 times.

“The martini is such a simple recipe, but such a difficult thing to get right,” explains Gary Sharp, who set up the event with entrepreneur James Thomas. “It’s a personal drink. Everyone likes martinis in their own way.”

He and Thomas decided to launch the challenge in a bid to find the perfect “benchmark gin” for a dry martini. The two men come from IT/consultant backgrounds, and bonded over their quest to find the world’s best martini while travelling for work.

Their mission became so complex that the pair have now set up what they hope will become an annual challenge.

Already, the judges have narrowed down a shortlist. Surprisingly, the big names most of us turn to – Gordon’s and Hendrick’s for starters – have not made the top five. Instead a new generation of global gins is in line to be crowned king of the martini: Daffy’s, Hepple, Caorunn, Darnley’s View and Brooklyn Gins.

You’d be forgiven for never having heard of them, let alone having a bottle stashed in your drink’s cabinet. Gin is experiencing a boom, and 40 new craft distilleries opened in the UK between January and November last year alone. Sales have grown more than any other spirit sold in UK pubs, bars and restaurants and, for the first time, in 2016, surpassed £1 billion in Britain. Forget mother’s ruin. Gin is the drink de jour.

Neither Sharp nor Thomas expected that their search would end up focusing on independent gins, and not include their previous go-to choice of Tanqueray No. Ten. “The smaller companies are real enthusiasts,” says Thomas. The biggest brands can, he admits, “be a little bit bland, while the newer gins are inventive and fresh.”

What’s more, many of them count the classic dry martini as their gold standard.

Walter Riddell, managing director at the company that produces Hepple gin, is thrilled to be nominated, saying “when we set out to build a gin in a radically new way three years ago we had the martini in mind.” While Chris Molyneaux, managing director and distiller at Daffy’s, explains: “Creating a gin with great complexity and finesse that makes an incredible martini has always been a top goal for us.”

Now all that remains to be seen is which gin will take home the accolade of making the ‘world’s best martini’ – and whether the gin giants of old will be inspired to join the martini revolution. Hogarth would be proud.

The World’s Best Martini Challenge is on Tuesday 17 January at 7pm at Three Six Six Battersea in London.